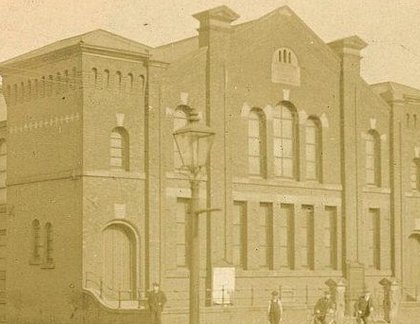 "The Church of the Warm Heart and the Open Mind"

A MEMBER CHURCH OF THE CONGREGATIONAL FEDERATION

A MEMBER Of CHURCHES TOGETHER IN WALKDEN

Please take the time to explore -

We seek to be a church with a warm heart and an open mind.

THAT INVOLVES AN OPEN MIND - THEOLOGICALLY.

"I believe passionately that Christianity is a way of life,not a theological system with which one must be in intellectual agreement. I feel that Christ would admit into discipleship anyone who sincerely desired to follow him and allow that disciple to make his creed out of his experience; to listen, to consider, to pray, to follow, and ultimately to believe only those convictions about which the experience of fellowship made him sure.”

"Christianity ~ is the Jesus-like attitude to God,
to the World,
to people
to everything."

"Unity among Christians can never be creedal. The attempt to bind Christians together by authoritarian statements has failed over and over again and only leads to strife and division. Indeed creeds cannot give rise to unity, for it is not in the nature of human beings to agree about words.The bond which should bind together all Christians is the bond of the Spirit, for Christianity is a religion of the Spirit."

We are the first mainstream Christian Church in the City of Salford to offer this ministry.

We believe that for the Gospel to truly be Good News, it must be a gospel of extravagant grace, radical inclusion and relentless compassion.

To that end, we welcome people of all ages and backgrounds and affirm that God`s love as revealed in Jesus Christ is for everyone and not just a chosen few.

The congregation today, despite it`s theologically conservative beginnings, prides itself on a long history of inclusiveness and is a broad church welcoming a variety of theological opinions.

On the first Sunday of the month we celebrate the Sacrament of the Lord`s Supper or Holy Communion. At this service we share bread and wine in obedience to Jesus command "Do this in memory of me".
This is the Lord`s Table, it is He who invites and all who wish to receive are welcome in His Name.

This service is conducted by our minister, the Rev Alan Kennedy.

"In Congregational Churches, as a matter of propriety and order, the pastor always presides at the Lord`s Supper; but there is nothing in the New Testament to prevent a church from celebrating the Sacrament in the absence of its pastor"

Baptism,as the Sacrament of Welcome for either adults or infants into the Family of the Church, is celebrated on a Sunday morning as part of the regular worship service.

For infants, an alternative Ceremony of Thanksgiving, Dedication and Blessing is available for parents who cannot in all conscience make the vows entailed in Baptism.

On the third Sunday (although this may vary according to Seasonal Services) worship is followed by a soup lunch.        This service is normally conducted by our minister.

Other services are taken by members of the congregation or by visiting preachers. Please see the Calendar on the website for details.

We are mindful of the needs retired and elderly people and our popular Third Wednesday Club brings up to 30 people together every month to listen to a range of interesting speakers and to enjoy a chat and refreshments.

We are also privileged to host activities for toddlers and children.

A variety of community, social and sports groups meet during the week.

If you would like to request a pastoral visit, arrange a baptism, wedding or funeral, or discuss church membership, please contact our minister  who will be happy to meet with you and see how we can help.

Baptisms and Blessings are conducted on Sunday mornings as part of the regular worship service.

The minister`s details are on the bottom of the page.

Our present church premises include; a chapel with seating for up to 70 people, a social room, 3 additional meeting rooms, 2  kitchens, toilets and a large community/sports hall.

Our facilities are available to the whole community and we host a wide variety of groups including; Carers and Toddlers, Sequence Dancing,  Badminton, Line Dancing, Yoga and other community based events.

Later they transformed themselves into Harriet Street Christian Church. The "upper room" where they met, a loft above a sawmill, had previously been used by the Salvation Army.
At the first anniversary of the new fellowship, held at Dacca Twist Company`s mill, Dr Macfayden spoke from St Paul`s words, "If this work be of God, it will prosper but if not, it will come to nought."

Central to the concept of an independent church is the Church Meeting. This is primarily an event of worship, which members of the church concerned are encouraged to attend, to consider and decide all questions to do with the life and work of the fellowship.

Members may appoint deacons whose work is to offer pastoral care within the congregation, assist at the Lord's Table and attend to issues, say, of fabric and finance.                Congregationalists have a strong belief in the 'Priesthood of all Believers'.

At the Lord's Supper, there is an 'open table' at which 'all who love the Lord in sincerity and truth' are welcome.

It is the normal practice of Congregationalists to baptise infants and adults who have not previously been baptised. This baptism is a recognition of God's grace towards us: he loves us and wishes us to be involved in Christ's Church.

Ordination is available both to men and women. It does not confer any mystical status, but separates them for a particular form of leadership. The Federation recognises ordination, which is carried out by the local church to which a minister is first called, as authentic for future ministries.

The Federation maintains a list, printed in a year book, of accredited ministers and pastors who have concluded satisfactory levels of training.

Congregationalists stand in a tradition of sound scholarship, and offer training courses leading to ordination, lay preaching and Christian discipleship. All the courses can lead to a certificate or diploma or degree from a recognised University College.

The Annual Assembly recommends a minimum stipend, below which churches are not encouraged to employ a full-time minister.

The Federation was formed in 1972 as continuing fellowship of churches which declined to join the United Reformed Church.

Independent churches had formed the Congregational Union in 1831 through recognising 'the scriptural right of every separate church to maintain perfect independence in the government and administration of its own affairs.'

Congregationalism in Scotland emerged at the end of the 18th Century as a result of a revival of religion and as a protest at the formalism and authority of the General Assembly of the Church of Scotland. In the 20th Century, move towards organic unions increased in Scotland at they did in England.
In 1993 the Congregational Union of Scotland decided to become a 'Church', so opening the way to organic union with URC. A considerable number of churches there decided not to enter the new church and were received into the Federation in 1994.
There were 39 churches in Scotland affiliated to the Federation by 1999 most of which had previously belonged to the Congregational Union of Scotland.

The latest figures for the Federation record a total numeric strength of 5,383 in 233 churches (2021 Year Book).